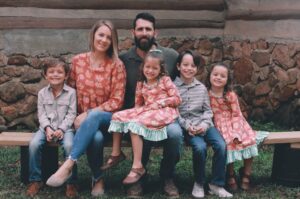 On February 10, 2021, after a very long journey, the Boswells finalized their adoption of the sibling set of 4 that had been placed in their care. The oldest 2 kids had been placed with them in December of 2017. The younger twins came to live with them in November of 2019. The Boswell’s had always wanted to have kids, but were not able to have kids of their own. The Boswell’s learned about fostering through Mr. Boswell’s brother and sister-in-law who were fostering to adopt. Mrs. Boswell had always wanted to adopt and this opened their eyes to the possibilities. They had no idea that their first placement would be their only placement.

Mrs. Boswell said that taking in the oldest 2 children was pretty easy. They had been fortunate to be able to do respite placements with the kids beforehand because the previous family was also licensed through Bloom. The kids attached to the Boswells very quickly and were soon calling them Mommy and Daddy. When the younger twins came to live with the Boswells, it was a bigger transition because the 4 kids had never really lived together. It was a big adjustment for all the kids in managing their tempers and attitudes. The twins were not used to being told no and would through tantrums when they didn’t get their way. At first the girls were aggressive towards one another and the twins would fight a lot, which the Boswells were not used to. However, after a couple months the kids seemed to understand that this is where they were going to be and learned that their foster parents were going to hold their ground and therefore, started to settle down and act like siblings would regularly act.

DFCS had been talking about TPR for the siblings since the beginning. However, the biological mom was in jail and they wantedto wait until she was released to try and give her a chance. The kids did visits with both parents intermittently and both parents were in and out of jail for the 5 years the kids were in foster care. DFCS officially started TPR in February 2020 but then Covid happened and the process was drawn out through October of 2020. In November everything switched over to adoption mode and they were in the process until 2/10/2021. The Boswell’s said that it has been a roller coaster and they are so thankful that they had Bloom during this process because Bloom was always there to support them, especially when DFCS wasn’t. Bloom would help the Boswells get what they needed from DFCS and it was nice to have that support and social worker as an ally. If they had to do it all over again, they would choose to do it with Bloom.

Mrs. Boswell said that to anyone wanting to go through this process or foster, she would encourage them to have patience. There were times that she was sick with worry on what would happen with the kids’ case and she had to remember that God was in control, they were God’s kids and he has a story written for them, and now they get to see what that story will be. Mrs. Boswell said that she would also encourage foster parents to have a support group around them, especially someone who understands what you’re going through or has done it themselves, also recognized when you need to take a step back, take a breather, and regroup.

Sorry, the comment form is closed at this time.